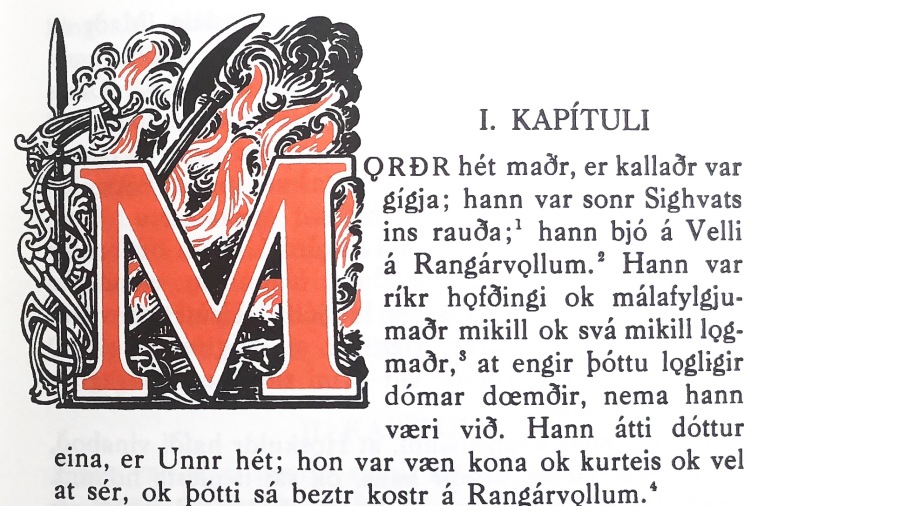 Please gather around and join me by the hearth if you wish to learn more about the Old Tongue! The theme of our current festivities shall be “Njáll hét maðr...”, which will be concerned with how great heroes are introduced in the sagas! During our next few gatherings, we will learn more about this theme, but first we must talk about nouns. As I am certain many of you know, nouns represent people, places, and things. An example is Maðr (the ð (called eth) is a ‘th’ sound, as in the), which is a noun that means ‘man’ or ‘person’. Njáll, on the other hand, is a special noun, often referred to as a proper noun, because it is a person’s name. But, in Old Norse, there are a few rules that accompany nouns that all folk in the hall may not be familiar with!

That said, there are four things to remember about Old Norse nouns, friends: number, gender, case, and declension type. Unlike English, these nouns have several different forms associated with them, which are generally determined by these four factors. So, let’s take a moment to talk about these categories and see how they can affect our nouns:

This one is quite simple: a noun can either be singular or plural. For example: maðr means ‘man’, but menn means ‘men’. These are the same noun, but the ‘number’ being referred to changes its form a bit. English often works the same way (man vs. men), although we don’t tend to think about that grammatically.

For grammatical reasons, there are three genders for Old Norse nouns: masculine, feminine, and neuter. Unfortunately, it isn’t always easy to predict what gender a noun is, so we often end up having to memorize its gender. Though, we can look at their case endings to figure out what gender they belong to, so let’s talk about those for a moment.

Remember the word maðr that I mentioned earlier? This is an example of a masculine noun in the nominative case. This noun is quite irregular, so let’s pick a different noun for our example: víkingr, which means ‘Viking’ (a job title!). Let’s also give the other genders representation, so we will also include ferð, a feminine noun meaning ‘journey’, and skip, a neuter noun meaning ‘ship’: 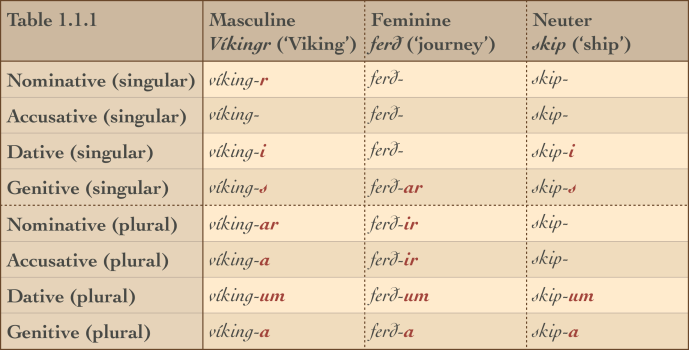 As you can see, each noun has a ‘stem’ (for example, víking for víkingr), which is followed by a case ending (for clarity, I have placed these endings after a ‘-‘). The result is a single noun having eight forms, depending on what role it plays and the number of that noun being referred to. I keep talking about roles, but what do I mean by this? How do these roles really work? Let’s look at some examples:

Nominative (subject): Víkingr fór til Englands. / The Viking went to England. (Our Viking is the one performing the action of the verb ‘to go’, making him the subject — Who is going to England? The Viking).

Accusative (direct object): Víkingr á skip. / The Viking has a ship. (The ship is receiving the action of the verb ‘to have’, making it the direct object — What does the Viking have? A ship).

Genitive (possessor): Dreki hét skip Víkings. / Dragon was the name of the Viking’s ship. (Our Viking possesses the ship named Dragon, making him the possessor — Whose ship is named Dragon? The Viking’s).

The Dative tends to be the most difficult case for folk to grasp, so study this case in particular, my friends! It can be tricky to figure out what role each noun is playing. To help, I recommend asking questions like those above. Who is performing the verb? What is receiving the verb’s action? To whom, or for whom, is the action intended? Whose object is that? Also, I should mention that certain prepositions call for specific cases, and they don’t always make sense to us (at first)! Consider our example for the nominative case: the word Englands is in the genitive case because of the preposition til! More on that later, though.

The last thing about nouns that everyone here in the hall should be aware of is declension type. You see, Old Norse divides nouns into two general categories: strong and weak. The difference between these declension types is best explained through an example, so listen well! Let’s take a look at the strong masculine noun konungr, meaning ‘king’, and the weak masculine noun goði, meaning ‘chieftain’: 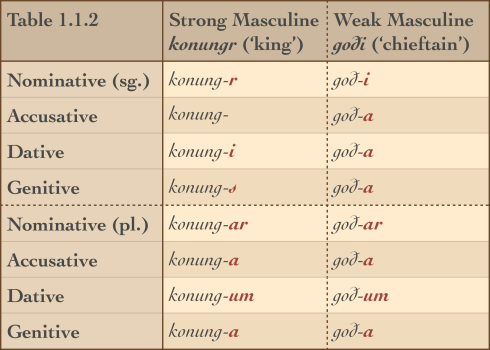 As you can see, the weak masculine noun goði has less ending variation, making it simpler and thus weaker, if that helps. To help you remember the differences between strong and weak masculine nouns, keep in mind that a king (konungr) is stronger than a chieftain (goði).

But things are a bit more complicated than that. There are four different categories of strong nouns (creatively called type I, II, III, and IV). Masculine nouns occupy all four categories, feminine nouns attend types I, II and IV, while neuter nouns only dwell in type I. The majority of strong masculine nouns, however, do belong to type I (such as our examples of víkingr and konungr), so rejoice in that, my friends! Maðr, on the other hand, belongs to type IV. Let’s not worry about all of that quite yet, though! For the moment, it is only important to be aware of these categories. We will cover them one type at a time during future gatherings.

I think that is plenty for today’s gathering, don’t you? Let us return to drink, food, and merriment while our newly acquired knowledge of Old Norse seeps into our memories. There is no assignment today, although I will occasionally provide brief exercises at the end of our gatherings in the future, so be prepared for them!

Words to Remember from Today’s Gathering…

If you have any questions (or if something needs to be corrected), feel free to shout in my direction or send a raven to my personal runestone (fjorntheskald@gmail.com) — make sure its beak is sharpened, though!

Until next time, my friends!

If this lesson wasn’t quite enough for you, take a look at some of the sources that went into making this lesson: