Jónas Hallgrímsson (1807-1845) is still frequently regarded as the most loved and admired poet of Modern Iceland.[1] He grew up on a rural farm in North Iceland (Hraun in Öxnadalur), where he learned and lived the oral traditions of Icelandic folklore, poetics, and saga reading; but, when he was sixteen, he spent six years studying Latin and Greek classics at a Latin school in Bessastaðir, located south of Reykjavík.[2] Later in his life, he went to Copenhagen (as all Icelandic intellectuals had to do at that time) and was captured by the spirit of German and Danish Romanticism, which he brought home with him to Iceland.[3] But, besides being a poet and an intellectual, Jónas was even an important Icelandic scientist, contributing to naturalist studies of the Icelandic landscape.[4] And so, as a result of this diverse upbringing and education, his poetry reflects a tight interlace of saga traditions, the spirit of Romanticism, and his deep appreciation for the Icelandic landscape.

In this rather short post, I am going to be sharing two of his poems: “Ísland” and the end of “Gunnarshólmi.” As a result, this post is only a taste of what Jónas’ poetry truly entails, so I encourage you to explore his work more if you find this post worthwhile. Several more poems by Jónas can be found here, and if you’d like to learn more about his life, consider the somewhat pricey (but wonderful) book written about him, which you can find here. But for now, please do enjoy these few selections of his poetry:

In 1835, Jónas published a poem called “Ísland” in the first issue of a periodical called Fjölnir, which he and three other friends created with the hopes of igniting a sense of national pride in their own cultural heritage.[5] This poem appeals to the “Golden Age of the Icelanders” (Gullöld Íslendinga), which was a remembering of their own past through their impressive saga literature.[6] This literature portrayed the medieval past of the Icelanders as one filled with noble independence, plentiful feasts, splendid ships, and respect abroad, and so Jónas calls upon scenes from several different sagas and characterizes the Icelandic landscape as a bountiful land of prosperity and wealth; but then he contrasts this image by lamenting how that past was now lost to them—the great assembly site of the Althing was covered in overgrowth and the fame of their glorious pass had been forgotten due to the “sleepiness” of his contemporaries. In short, it is a poem that passionately calls for Icelanders to “wake up” and take pride in their past traditions, which would thus revive and save the legacy of that remembered Golden Age.

Where are your fortune and fame, freedom and virtue of old?

All things on earth are transient: the days of your greatness and glory

flicker like flames in the night, far in the depths of the past.

Comely and fair was the country, crested with snow-covered glaciers,

over the sea from the east, eager to settle the land.

Raising their families on farms in the flowering laps of the valleys,

hearty and happy they lived, hugely content with their lot.

Up on the outcrops of lava where Axe River plummets forever

into the Almanna Gorge, Althing convened every year.

There lay old Thorgeir, thoughtfully charting our change of religion.

Heroes rode through the regions, and under the crags on the coastline

O it is bitter to stand here stalled and penned in the present!

Men full of sloth and asleep simply drop out of the race!

How have we treated our treasure during these six hundred summers?

Have we trod promising paths, progress and virtue our goal?

Comely and fair is the country, crested with snow-covered glaciers,

Ah! but up on the lava where Axe River plummets forever

into the Almanna Gorge, Althing is vanished and gone.

Snorri’s old site is a sheep-pen; the Law Rock is hidden in heather,

blue with the berries that make boys — and the ravens — a feast.

Oh you children of Iceland, old and young men together!

See how your forefathers’ fame faltered — and passed from the earth! [x]

Later, in 1837, Jónas published another poem in Fjölnir called “Gunnarshólmi.”[7] It recounts a famous scene from Njal’s Saga [online, book] where a man named Gunnar (who is still arguably the most admired Icelandic saga hero) decides that he cannot leave Iceland despite being deceitfully outlawed; because as he is leaving, he looks back at the slope near his farm and is taken aback by its immense beauty. In the context of Jónas’ own time, this poem embodies a message of patriotism and loyalty to Iceland: “Gunnar would not abandon his country, so why should we?” Yet, what made this poem even more powerful was that this Holm still stood (and still does); people could travel to the very spot where Gunnar made this famous choice. In fact, this connection between the remembered Golden Age past and the landscape is quite significant, because many people still lived on the farms that the sagas mention, and the same was true of the other places and geographical features that these characters interacted with.[8] And so, to his audience, this poem resonated with that deep physical connection to the Golden Age past which they could still feel and perceive in Iceland’s ‘Saga landscape.’

Handsome and strong, his halberd at his side,

beside him, girt with grey-blue sword, astride

and tied to Gunnar with intense devotion,

Kolskeggur rides, a man admired by all.

Thus, in a comity of mute emotion,

the brothers guide their horses from the farm:

Kolskeggur gazes out across the ocean,

of home so master him, he does not care

that savage foes have sworn to do him harm:

“Never before has Iceland seemed so fair,

the fields so white, the roses in such glory,

such crowds of sheep and cattle everywhere!

Here will I live, here die — in youth, or hoary

For Gunnar felt it nobler far to die

than flee and leave his native shores behind him,

even though foes, inflamed with hate and sly,

were forging links of death in which to bind him.

His story still can make the heart beat high

and here imagination still can find him,

where Gunnar’s Holm, all green with vegetation,

glistens amid these wastes of devastation.

Where fertile meads and fields were once outspread,

the sun-flushed glacier, with its snowy head,

the dwarves are gone, the mountain trolls are dead;

a desperate land abides its time of trouble;

but here some hidden favor has defended

6 | Jesse Byock, “History and the Sagas: the Effect of Nationalism,” in From Sagas to Society: Comparative Approaches to Early Iceland, ed. Gísli Pálsson (London: Hisarlik Press, 1992), 48. ^

8 | Icelanders can still feel this connection today, but for more on the feelings and situation from this period, see Byock, “History and the Sagas,” 54. ^ 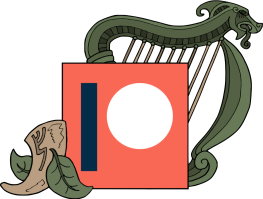 My sincerest thanks go to Fjörn’s Fellowshipfor their gracious support. Without your companionship, this Hall would be nothing. Here are the names (taken from Patreon) of those who supported me while I wrote this post: