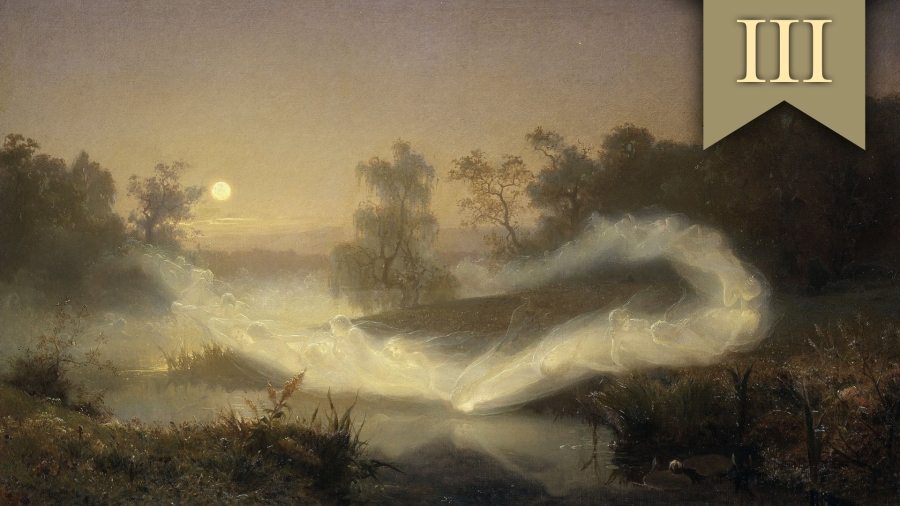 ☞ Before reading: This is part III of the (slightly modified) written form of the Fjörn’s Hall Podcast episode titled “Landvættir: The Land-Spirits of the Medieval North.” You may listen to it here, or you may enjoy it in written form below!

Just because land-spirits could be frightened doesn’t mean that we should be fooled into believing that they were completely harmless. In reality, these land-dwelling neighbors could be as dangerous as they could be benevolent, especially when they didn’t like someone. In other words, they’re pretty much your average neighbor, except they live in a nearby hill rather the hall next-door—and it’s always best to stay on good terms with them. But how? How did medieval Icelanders interact with these land-dwelling neighbors? Well, I’ll first share the story of an Icelander who did a rather bad job at it.

There was a man named Hjorleif, for example, who wasn’t very fond of sacrificing. This may not seem too problematic at first, but the land-spirits often needed to be involved during the process of settling this new land, and that was typically done through a sacrifice.[1] But since Hjorleif didn’t bother with sacrificing, he faced constant hardship: his ship drifted, he ran short of drinking water, and then his Irish slaves prepared a gross drink made from flour and butter as a substituted for water—his only fortunate then was to be saved by a sudden downpour, which provided them with some much needed water to drink. But then, only a few winters after he landed, his slaves decided to kill his one and only bull. And if that wasn’t bad enough, they killed him while he was in the woods looking for some brown bear they used as a scape-goat—a bear that they probably made up, by the way.[2]

In the end, Hjorleif’s attempt to settle Iceland is probably among the worst recorded. This endeavor is made even worse when we consider the fact that his blood-brother was Ingolf Arnarson, the earliest recorded permanent settler of Iceland. Ingolf is so well-known for his success, in fact, that he has a statue in Reykjavík (pictured to the right)—and it is his arrival in 874 that traditionally that marks Iceland’s founding, although archaeological evidence has been found that complicates that narrative—but we don’t need to get into that right now. So why did Ingolf have so much success while his own blood-brother floundered around in southern Iceland? Well, Ingolf held a big ol’ sacrifice before coming to Iceland, whereas his lazy blood-brother neglected to do so. In other words, he did not butter up the land-spirits before barging onto their home.

And to make matters even more frightful, the land-spirits prevented anyone from settling in that spot after Hjorleif’s death. As a later chapter from the Book of Settlements tells us, a man named Olvir Eysteinsson took possession of that land, but the account says that “no one dared to settle there for fear of the land-spirits, since Hjorleif was killed there.”[3] In the end, the land-spirits may not have killed Hjorleif themselves, but he certainly did not have their blessing to stay.

The Tale of Thorstein Red-Nose

Fortunately for Icelanders today, not everyone was as foolish as Hjorleif. There was a man named Thorstein Red-nose, for example, who was known to be a “great sacrificer.”[4] And honestly, his account is one of my favorite land-spirit-related stories. It is said that he used to make sacrifices to his local waterfall—yes, a waterfall—and that all of his left-overs had to be thrown into it. Just imagine being that guy who just walks up to a waterfall, chucks some food into it, and can suddenly “see clearly into the future.”[5] Unlike Hjorleif, Thorstein clearly knew how to please his land-dwelling neighbors.

But Thorstein didn’t have foresight just for fun—he used it to acquire 2400 sheep. And I’m not making that number up, either—although I did claim to have 789 sheep in my Icelandic class in Ísafjörður once (I wasn’t being serious of course, but it was fun to say in Icelandic). Anyway, our source explains that he had this many sheep because “each autumn he could see which of the sheep were doomed to die, and he had those slaughtered.”[6] In other words, Thorstein became a successful farmer thanks to the foresight granted to him by a waterfall-dwelling land-spirit, breeding only the best of his sheepies. And so, thanks to his benevolent land-dwelling neighbor, Thorstein lived a life of prosperity until his death-day—which he foresaw, of course. And if we had any doubt that his army of sheep came from the land-spirit’s blessing, our source clears our minds with this line: “The night he died, all the sheep got swept into the waterfall by a gale.”[7]

So, in other words, if you live near a waterfall, you might want to consider sacrificing to it—but in all seriousness, these two examples alone show us just how fickle the land-spirits could be. If someone didn’t give them offerings, they could make their life Hel; but if someone buttered them up with plate-fulls of leftovers, on the other hand, they might just grant them an army of sheep with a side of foresight.

The Tale of Billy-Goat Bjorn

But sometimes land-spirits offered gifts, rather than waiting impatiently for some farmer to wander over to their waterfall dwelling. In another fascinating account from the Book of Settlements, a man named Bjorn is approached by a cliff-giant through a dream. In this dream, the mysterious cliff-giant kindly offers Bjorn the gift of partnership, which Bjorn courteously accepts. And shortly after that, a strange billy-goat appeared at his farm, joining his herd of goats. Better yet, Bjorn’s livestock began to multiply “so fast that soon he was a wealthy man.”[8] Now, I did say this was a land-spirit, so why does our source call our dream-spirit a cliff-giant? I have chosen to read this as another way of referring to a land-spirit, since the categories separating spirits, elves, trolls, and giants are often blurred in our sources; it can honestly be difficult to draw confident lines between them.

But luckily the text clears our doubts a bit, because whenever a person is suddenly blessed with such prosperity, the community takes notice—and medieval Icelandic communities sure did keep up with their local gossip. People were so attentive, in fact, that they noticed that Bjorn’s farm flourished after that mysterious billy-goat appeared there, so they started calling him Hafr-Björn, which means Billy-goat Bjorn. And honestly, that’s just a fantastic nickname. But the community also noticed something else, at least those blessed with something called second sight, that is. Those people saw that Billy-goat Bjorn was accompanied by “all the guardian-spirits of the land” whenever he attended the Althing, and that even his bothers, Thorstein and Thord, were accompanied by them whenever they went fishing.[9] Thus, Bjorn’s whole family was blessed and protected by the land-spirits ever since Bjorn accepted that cliff-giant’s offer. So whether that cliff-giant was actually a land-spirit or not, it was certainly associated with them in some way.

Billy-goat Bjorn’s story provides us with another example of how land-spirits could make for friendly neighbors—if a farmer accepted their partnership, that is. And while not all Icelanders could actually see the land-spirits, they at least could approach people without the second sight through dreams. But if the land-spirits didn’t want to approach an individual, an Icelander could choose to seek them out. Now, I’m not actually sure how Thorstein learned that his local waterfall was the dwelling of a local land-spirit, but however he managed to find it, he was in its good graces after offering some sacrifices.

In the end, both the land-spirits and the newly arrived Icelanders could deal with their respective new neighbors in a variety of ways: they could ignore them completely, offer them leftovers, or sign a business deal with them through a dream. As we learned from Hjorleif’s story though, it’s probably not a good idea to forgo schmoozing your new land-dwelling neighbors, especially when you’re an outsider settling on their land. So, my friends, learn from Hjorleif’s mistake and follow the examples of Thorstein and Billy-goat Bjorn: leave your local land-spirits some leftovers and always accept their offers of companionship if they approach you through a dream. But honestly, just be respectful of their home, the earth, and try not to litter—those things will make the land-spirits happy too.

Make sure to wander back for part IV!

☞ Minor Disclaimer: Most of the book links provided in this Hall are affiliated with Book Depository, which always offers free shipping (regardless of where in Midgard you dwell). Better yet, every purchase made using those links will help the Hall grow and prosper at no additional cost to you. ᚦᚬᚴ:ᚠᛁᚱᛁᚱ (Þǫkk fyrir)

As always, I extend my most sincere thanks to my dear Fellowship of esteemed patrons over on Patreon. Without their support, this Hall would not be as lively and warm as it is today. Here are the names of those who supported me during the writing of this post (taken from Patreon): Anastasia Haysler, Froggy, Jonas Lau Markussen, Kathleen Phillips, Kevin McAllister, Patch, and Sarah Dunn. ᚦᛅᚴᛅ:ᛁᚴᚱ:ᚴᛅᚱᛚᛁᚴᛅ:ᚠᛁᚱᛁᚱ (Þakka ykkur kærliga fyrir)

One thought on “Land-Spirits, III: Dealing with New Neighbors”